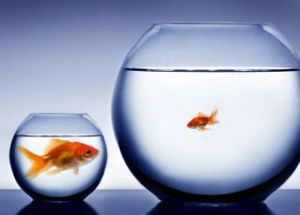 Back in the late 90’s was this movie called “Romy and Michelle’s High School Reunion.” (Alert: this movie was rated R – primarily for language).  It’s about these two gals who want to impress their peers at their ten-year HS reunion. Apparently, they categorized themselves as part of the “B” group and they felt inadequate to the girls in the “A” group (popular cheerleader types). However, they unknowingly made girls in the “C” group (the nerdy outcast types) feel just as jealous and inadequate as they were of the cheerleaders. Poetic justice comes to this story when the star of the reunion is not the prom queen or the football hero, but a former “C” groupie – a braniac nerd who became a suave multi-millionaire. (BTW – If the Nerd thought resonates with you – as it does with me, let me recommend an outstanding Nerd and spirituality blog is thechristiannerd.com written by my friend and colleague, @scotthiga)

There’s a little of Romy and Michelle in all of us: we get preoccupied with how well we measure up to the standards of this world. Too much time, energy and money are spent in trying to be people we’re not, in order to impress people we don’t like. In turn, we are also guilty of looking down on those who don’t measure up to us; often in ways that make them feel inferior or inadequate.

The key to overcoming the “comparison trap” is knowing who we are in Christ. When we grasp how God looks at us, we don’t need to worry about what other people think. When I realize that God loves me for who I am, that He sees the Christ’s righteousness when He looks at me, and that He has redeemed me to become like Jesus – it really doesn’t matter what others think.

Of course, this understanding is easier said than done. Any of us can say, “God loves me for who I am; and I don’t care what anyone else thinks!” But it is another thing to actually live that out. We exist in a world where, like it or not, we are constantly compared with others and our ability to measure up to human standards of adequacy (whether that be productivity, appearance, wealth, or status). The “comparison game” is insidious; it pops up when we least expect it and before we know it we are sucked into its traps of envy, bitterness, gossip, and self-preoccupation.

I wrestle with this issue more than I would like to admit, but I have found the following to be very helpful to keep me out of this “game” and into the Lord’s business:

1. Focus on what God thinks of you. I do this often as part of my personal worship time. I set God apart as my Righteousness (Jeremiah 23:16). I tell Him (and myself) that my Righteousness comes from Jesus and His shed blood for me; not from my accomplishments or good deeds, not from what others think about me. Letty reads aloud Scripture that talk about her identity in Christ (from Neil Anderson’s Steps To Freedom). Whatever your method, it is important to center on “God’s perspective of you” as a part of your daily routine.

2. When discouraged, get encouraged. I have a file of notes and letters that people have written to me when God used me to bless them. When I feel the “comparison game” coming on, I will read one of those notes to remind me of God’s work through me. Mentoring is also a good way to get honest encouragement. Share your struggles with comparing yourself with others to a trusted mentor or accountability partner. They will help you to get perspective and encouragement.

3. Depopulate your “C” group. There are those we look down upon; not just groups of people, but individuals as well. They are the ones we gossip about or avoid or patronize. We need to see them as God does: people He created, formed and made for His glory – just like you and me. As we lower the population of our “C” group, the desire or need to compare ourselves with the “A” group becomes increasingly less.

Why compare? You are unique and special to the Lord. To Him, you are beyond comparison. Whole Life Worshipers revel in God’s love for them … and to become all that He created us to be!

What things have helped you overcome the comparison trap?