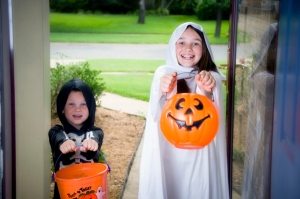 Every October 31st my dear friend, Pastor Rob Acker, and I heartily greet each other in a special way. Only we won’t say “trick or treat,” but “Happy Reformation Day!”

You see on a Halloween almost 500 years ago, long before any child ever knocked on a door for candy, Martin Luther knocked on a door of a church in Wittenburg, Germany. Actually, he nailed something to the door: a bunch of papers which contained 95 complaints against the Roman Catholic Church. At the time, there was only one church in Europe – the Roman Catholic Church. It had become corrupt and powerful. It taught superstitions that kept the masses under control. It exploited people for money to acquire lands, build grand cathedrals, and make the upper echelon leaders (bishops, cardinals and popes) extremely wealthy. Though many tried to change the church – including good priests and bishops within the system – they were met with decisive and powerful opposition, resulting in public executions.

Then came Luther. He was a monk and professor of theology at the University. In his own brokenness and search for true reconciliation with God (beyond the works of piety and penance prescribed by the Church), he started reading the Bible – specifically, the book of Romans. There he discovered something that had been lost over the centuries, lost under the corruption of the Church leadership: justification through faith alone in Jesus Christ.

And so he pounded these papers to that Wittenburg door, the Protestant Reformation began. The course of human history has not been the same since that time. In fact, Time magazine recognized Martin Luther as the most influential Man of the Millennium (1000-2000).

Admittedly, the Reformation caused a mixed bag of good and bad things – most of the bad resulting in the fractured relationship between the Catholic and Protestant Churches. But there were some really great things that happened because of Luther’s boldness and courage to stand up against corruption and false teachings:

1. It brought unconditional grace and forgiveness back to Christianity. People had to “pay,” with money or religious acts, to receive forgiveness of sin.

2. It gave common people access to a personal relationship with God. One had to go through a human mediator (priest) in order to talk with God.

3. It put “faith” back as the center of Christian belief. Obedience to Church rules and traditions were more central to belief than any actual, personal trust in God.

4. It made the Bible accessible to common people. Because of Luther’s revelation through the Scriptures, almost immediately the Bible began to be translated in the languages of the common people (before it was only in Latin or Greek, and only learned clergy knew how to read that). As well, the printing press was invented near the time of the Reformation which made the Bible even more accessible to the common folk.

So Rob and I believe there’s a greater holiday to celebrate on October 31st than the one where everyone dresses up like ghost, goblins, witches, superheroes and Freddie Kruger. We’re trying to make Reformation Day bigger than Halloween, but it’s an uphill battle. We really can’t see little kids dressing up like 16th century monks, ringing doorbells and saying, “Fight corruption in the church!” and then expecting to receive candy. I don’t think it will work.

But we have reason to celebrate today, and so do you! Because of Luther, Whole Life Worship of God can be pursued Biblically, passionately and personally, without fear or institutional distraction.

So (let’s say it together), “Happy Reformation Day!”

3 thoughts on “No Tricks, Just Treat”