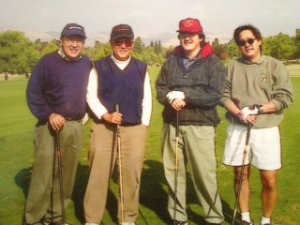 God has blessed me with two amazing brothers (and two amazing sisters, as well – I’ll write about them at another time). My parents did well in raising their family in the ways of Jesus – even though Christ did not become “front and center” in our family until my later teen years.

Both of my brothers were born in this month. Randy was born on this day (Feb. 6) in 1960. Gary was born two years later on Feb. 9, 1962. (My sister, Janet, was born in between them on Jan. 27th – you can imagine what my mom had to go through during those early years with three kids in diapers!)

Randy was my companion in those early years. Though we were 2 ½ years apart, it was like we were joined at the hip from the moment he was born. I guess God knew I needed a younger brother. We often shared the same room (until I was a teenager), and with it countless days of playing together (even though he made up the rules to many of the games we played) and countless nights of dreaming together (whether that was hitting the game winning home run or what we would become in life). Randy was very competitive – which spurred me to become more aggressive in life (by nature, I’m pretty complacent). He was also always generous (contrast that to my being a “tight wad”), which is something I greatly admire in him (and often find myself a recipient of his generosity).

Gary was more connected with Janet in our childhood years. We weren’t extremely close, but I’ve always deeply respected him. Gary was always a person of a few words, but what he said was always important and truthful. This helped me want to become more genuine. To me, words came easy and flowed. Sometimes I found power (albeit, a false and evil power) to use words to influence people for my benefit. But Gary’s example always guided me towards truthfulness and sincerity in speech and life. Also, Gary was a deep thinker. He usually had a different opinion than that which was normally expected. Because of that, we used to call him “Contrary Gary.” But he wasn’t being contrary at all. He was simply thinking deeper than the rest of us. And that has inspired me to become more reflective.

We are brothers of the same earthly mother and father. But even more importantly, we are brothers of the same Heavenly Father. Each of us came to Christ in different ways, but we were all profoundly touched by Him. I can proudly say that Jesus Christ has helped each of us to become the best versions of ourselves – which happens when we desire to be like Jesus. They are both active in their churches, have wonderful families, and are working to bring God’s Kingdom to our world. They have both gone through terrible hardships and trials, but have found the grace and power of God in the midst of their brokenness and the brokenness of our fallen world.

Although I’m the only one in “professional” ministry and I have a few years seniority on them, I am the one who learns from them. They are men of action, not just theology. Their whole life worship has empowered them through things like cancer, financial recessions, unemployment, estrangement, tragedies and the like. My life, though with its challenges, has been pretty mild and calm by comparison.

But it has gone both ways: they have shared with me that my prayers, counsel, and spiritual guidance have helped them from time to time. I’m so glad to be a blessing in their lives, for they have blessed me so much.

I guess that’s what brothers are for: to come alongside, to learn from, to be inspire and motivate, and to sharpen each other as “iron sharpens iron” (Proverbs 27:17).

I’m so blessed to have many brothers, and especially the ones with whom I’m related to in more ways than one.

Who are the brothers (or sisters) that inspire you to follow Jesus more closely?

What can you do today to be a brother or sister that brings encouragement to another?